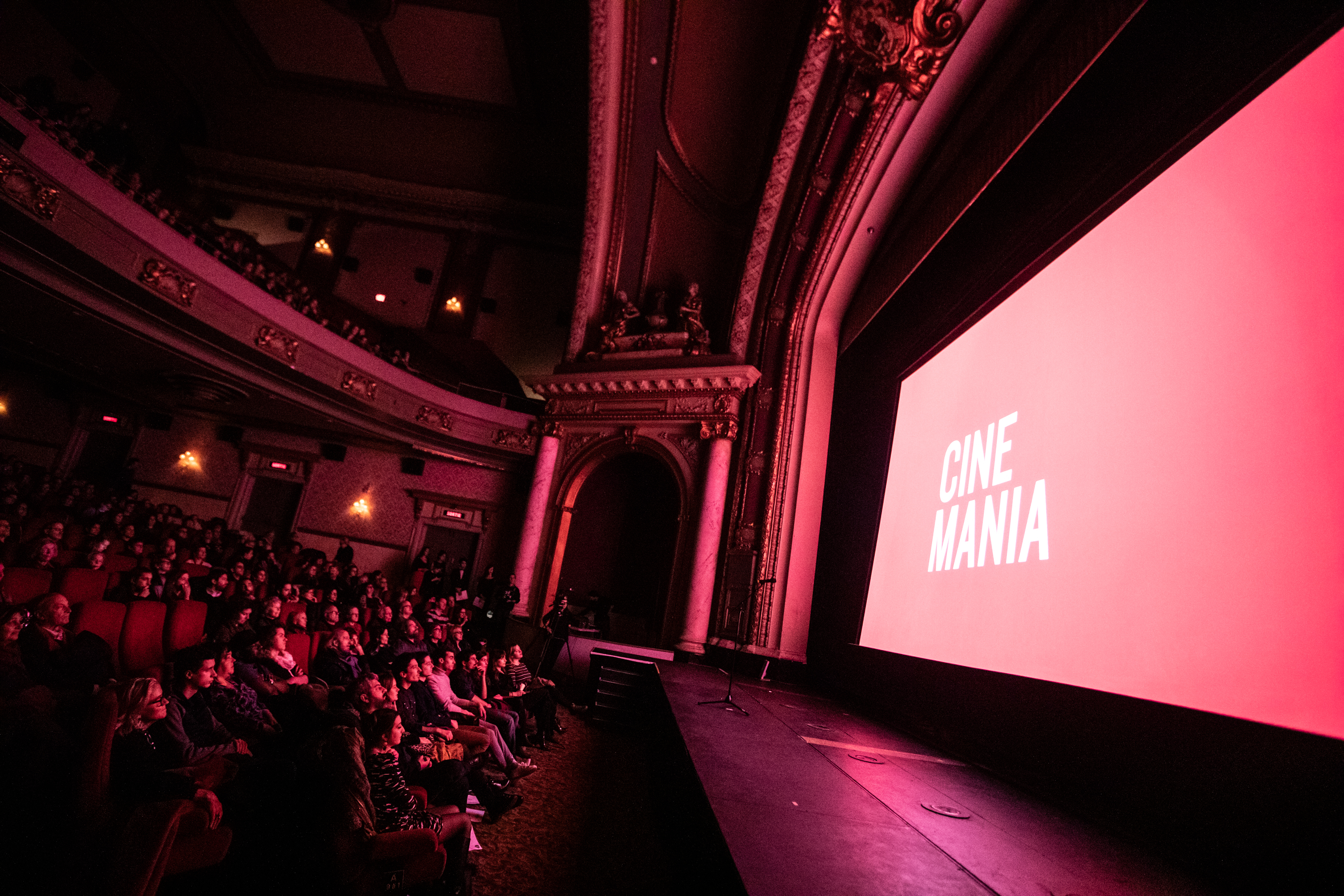 CINEMANIA Film Festival is pleased to announce this year’s program of 51 feature films, North American, Canadian and Quebec premieres selected among the best of the year’s Francophone feature films from such International Festivals as Cannes, Berlinale, and TIFF. And, always with English subtitles! In all, 17 countries are represented, with 23 invited guest artists, directors, actors and producers who will introduce screenings and interact with Festival-goers during the 25th Anniversary edition, November 7 – 17th, 2019. In addition to CINEMANIA’s central focal point at the Imperial Cinema, screenings and events will also take place at the Outremont Theatre, Cinéma du Parc, Cinéma du Musée, La Cinémathèque Québécoise, as well as Hotel Sofitel and PHI.

OPENING, CLOSING and PRE-OPENING NIGHTS
The much-anticipated PORTRAIT OF A LADY ON FIRE by Céline Sciamma, Best Screenplay award Cannes 2019, opens the Festival on Thursday evening, November 7th, at the Imperial Cinema. The film, a 19th century drama, revolves around an intense and intimate relationship between a painter Marianne (Noémie Merlant) and her subject Héloise (Adèle Haenel) who reluctantly sits for a pre-marriage portrait.

The feature film SPREAD YOUR WINGS starring Jean-Paul Rouve (C’est la Vie) and Mélanie Doutey (Sink or Swim), will close the Festival on November 17th at the Imperial Cinema, presented by filmmaker, writer and adventurer Nicolas Vanier who was inspired by the true story of ultra-light aircraft pilot and co-screenwriter Christian Moullec who actually led migrating geese across Europe. Crucial environmental issues are at the core of SPREAD YOUR WINGS as well as a tender story of father-son bonding.

Again this year, CINEMANIA is offering a special pre-opening screening at the Outremont Theatre on Tuesday, November 5th,  of the Quebec production of ANTIGONE by director Sophie Deraspe. Both the director and Nahéma Ricci, who plays the starring role, will introduce the film chosen as Canada’s official entry, Best Foreign Film, Oscars 2020. ANTIGONE has already won the award for Best Canadian feature film at the Toronto International Film Festival (TIFF).

CELEBRITY GUESTS of the 25th EDITION
This year, as always, special CINEMANIA screenings will be presented by many guests: LES MISÉRABLES, France’s official entry Oscars 2020 Best Foreign Film, will be introduced by Almany Kanouté, and Steve Tientcheu, as well as by Alexis Manenti (who also appears in THE TRUK by Sarah Marx). Zabou Breitman will present the animation feature THE SWALLOWS OF KABUL that made its mark at Cannes 2019 and at the Annecy Film Festival; the actor Djanis Bouzyani will introduce YOU DESERVE A LOVER by first-time director Hafsia Herzi (who acted in La Graine et le Mulet and Apollonide); director Antonin Baudry will accompany his film THE WOLF’S CALL and Dominique Besnehard and actor Eric Caravaca will grace CINEMANIA’s stage for THE DAZZLED.

The 1990s saga PAPICHA highlighted at Cannes 2019, is Algeria’s official entry for Best Foreign Film Oscars 2020, and will be presented by its director Mounia Meddour; the Franco-Montrealer Laurent Lucas will introduce the courtroom drama CONVICTION by Antoine Raimbault; Serge Toubiana, critic and President of Unifrance will introduce a feature film that chronicles the illness of his wife, writer Emmanuelle Bernheim, in LIVING AND KNOWING YOU’RE ALIVE by Alain Cavalier.

And, this year, CINEMANIA welcomes Québécois actor Niels Schneider, ubiquitous these days on screens in France, who will introduce a Gala Presentation of SYMPATHY FOR THE DEVIL by Montrealer Guillaume de Fontenay. The actor plays Paul Marchand, a foreign correspondent who reports on the siege of Sarajevo in the middle of the Bosnian war. Schneider also appears in three other films screening during the 25th edition: SIBYL by Justine Triet in which he stars opposite Virginie Efira and Adele Exarchopoulos, BACK HOME by Jessica Palud, featured at Venice Mostra 2019, again opposite Adèle Exarchopoulos, and CURIOSA opposite Noémie Merlant (also stars in CINEMANIA 2019 Opening Film, Portrait of a Lady on Fire).

FOCUS ON MARIE GILLAIN
Belgian actress Marie Gillian is being featured this year by CINEMANIA with a retrospective at La Cinémathèque Québécoise where she will present 4 of her films: LES AFFINITÉS ÉLÈCTIVES by Vittorio and Paolo Taviani in which she plays an Italian countess who regains a great love of her youth; TOUTES NOS ENVIES by Philippe Lioret in which she plays a young judge challenged by corporate loan-sharks and their victims; MARIE by Marian Handwerker in a saga of adolescents coming of age in the early 1990s, and NI POUR, NI CONTRE (BIEN AU CONTRAIRE) by Cédric Klapisch in which she plays a cinematographer who helps some hoodlums accomplish a robbery.

SCREENINGS OF PREMIERES
Each year, CINEMANIA sets out to fulfill its mission of presenting premieres of many of the high-profile Francophone films as selected from the programs of the major international film festivals. Montreal filmgoers can screen THE TRUTH by Hirokazu Kore-Eda (Palme d’Or in 2018 for Une Affaire de Famille), the Opening Film at Venice Mostra 2019, co-starring for the first time ever Juliette Binoche and Catherine Deneuve; or, ALICE AND THE MAYOR by Nicolas Pariser in which Fabrice Luchini plays the exasperated Mayor of Lyon who consults with a young philosphy advisor played by Anais Demoustier; LA BELLE ÉPOQUE by Nicolas Bedos, presented out-of-Official-Competition at Cannes and at TIFF, starring Guillaume Canet, Doria Tillier, Daniel Auteuil and Fanny Ardant in a love story that transcends decades; the Canadian premiere of Christian Honoré’s ON A MAGICAL NIGHT starring Chiara Mastroianni and Benjamin Biolay; the Franco-Belgian war-story production THE MERCY OF THE JUNGLE by Joel Karekezi; or, OH MERCY! the latest Arnaud Desplechin movie starring Léa Seydoux and Sara Forestier in the roles of a couple of drug-addicted lovers accused of murdering an elderly lady.

In addition, CINEMANIA once again includes many North American premieres in its program: CAMILLE, the story of a French journalist’s death during the Central African Republic conflict; THE PERFECT NANNY by Lucie Borleteau adapted from the best-selling eponymous novel; the latest film by Bertrand Blier HEAVY DUTY starring Gerard Depardieu and Christian Clavier; FAREWELL TO THE NIGHT by André Téchiné wherein Catherine Deneuve plays a helpless grandmother faced with the radicalization of her grandson; I’LL GO WHERE YOU GO, a dramatic comedy filled with good humour by Geraldine Nakache, an exploration of deep unexpressed love between two quite different sisters, starring Nakache and Leila Bekhti; the Franco-Taiwan production TERRITORY OF LOVE, a poetic drama by Roman Cogitore; Stephane Demoustier’s thriller THE GIRL WITH A BRACELET based on a real-life story that captured front pages; THE BEST IS YET TO COME a dramatic comedy reuniting Fabrice Luchini and Patrick Bruel on-screen together after many years; BEYOND THE HORIZON by Delphine Lehericey with Laetitia Casta; THE BEST YEARS OF A LIFE (Montreal premiere) by Claude Lelouch (Oscar-winning director of A Man and a Woman 1966), casts the same stars as in the original love story, Jean-Louis Trintignant and Anouk Aimée, tenderly reminiscing about what could have been; LOLA, a road movie of possible reconciliation between an estranged father and his transgender daughter; the romantic bittersweet comedy PLAY by Anthony Marciano; and REBELS, a French Thelma and Louise starring Cécile de France, Yolande Moreau and Audrey Lamy.

In addition CINEMANIA will be presenting 13 other premieres including: Grand Prize Winner at Cannes this year ATLANTICS by Mati Diop; ESCAPE FROM RAQQA a thriller about a virtually impossible rescue mission from ISIS territory, by Emmanuel Hamon with Swann Arlaud; WIPE OUT by Rodolphe Lauga, based on a real-life autobiography; SIMON’S GOT A GIFT with an introduction in-person by director Léo Karmann who unfolds an audacious and original tale filled with the magic of childhood, and finally, BURNING GHOST, a lyrical and phantasmagorical film by first-time director Stéphane Batut.

SPECIAL EVENTS
The premiere of SYMPATHY FOR THE DEVIL at CINEMANIA traces the lasting collective impact of the Bosnia-Herzegovina war, particularly influencing directors such as Emir Kusturica (La Vie est un Miracle) and Danis Tanovic (No Man’s Land). Montreal director Guillaume de Fontenay will describe what motivated him so strongly to recount the story of Paul Marchand, a most unconventional war correspondent. A provocative and intrepid daredevil, Marchand criss-crossed the Sarajevo combat zone in an old battered car with rooftop signage – “Don’t shoot. Waste your bullets. I’m immortal”. Niels Schneider, the actor who’s the incarnation of the war correspondent on-screen, will share his experiences of the filming with us as well as his impressions of Marchand. The discussion will be moderated by Jacques Beauchamp who is the anchorman on Radio-Canada’s “Aujourd’hui l’histoire”.

In collaboration with PHI, and on the occasion of CINEMANIA’s 25th Anniversary, the Festival presents an opportunity for cinephiles to experience Virtual Reality. During the Festival, on the mezzanine at the Imperial Cinema, filmgoers will be able to experience four immersive interactive short films presented in the newest technological media format.

It’s an opportunity to meet journalist and cultural chronicler Herby Moreau in the role of moderator of a round table discussion group during the first weekend of the Festival. Sophie Deraspe, director of ANTIGONE and Almamy Kanouté, Steve Tientcheu and Alexis Manenti from the film LES MISERABLES by Ladj Ly, representing Canada and France respectively at the Oscars, will talk about the awards in the 2020 Best Foreign Film category. Of note, this year CINEMANIA is also screening a film representing a third country, Algeria, for the Best Foreign Film Oscar – PAPICHA by Mounia Meddour.

UNTERVAL, in association with CINEMANIA Film Festival, and in collaboration with SODEC, Fonds des medias du Canada, Telefilm Canada and Le Bureau du Cinéma et de la Télévision du Quebec, is organizing co-production meetings of French producers of fiction feature films, documentaries and virtual reality content, to develop film projects together with their counterparts in Canada. Important and bilateral exchanges and collaborations have already existed between France and Canada for many years.

In collaboration with the Consul General of France in Quebec, CINEMANIA and Mediafilm team up during two days of workshops devoted to “media education”, specifically designed for high school teachers who wish to explore the potential of teaching the subject of cinema. On each day of the symposium, participants will attend a feature film-screening followed by a discussion led by a moderator from the film industry. Finally, a roundtable will follow on November 14th, attended by actors and French and Quebecois filmmakers designed to help in formulating recommendations on educational programs in cinema in the digital age.

AWARDS
A jury composed of young people and presided over by actor and director Guillaume Lambert will choose the winner of the Jeunesse Francophone Prize TV5. The jury will present the award to one of 7 films in competition that are most representative of the Francophone world through their originality and cultural composition. The jury is made up of young Francophone professionals. And, of course, CINEMANIA filmgoers are encouraged to submit their votes for the annual Mel Hoppenheim Prix du Public.

ALL TICKETS, COUPONS AND PASSPORT ARE NOW ONLINE !
BOX OFFICE INFORMATION
Tickets for all screenings as well as passports are currently available on sale on-line.