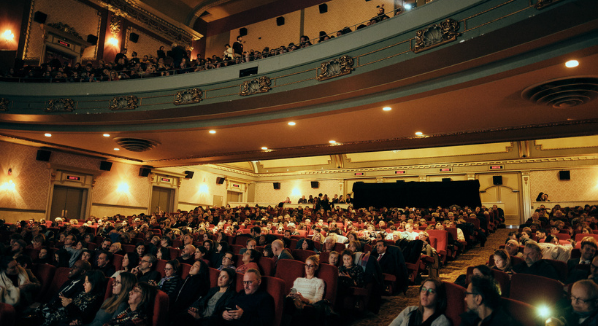 For 22 years, without interruption and always with passion and generosity, Mel Hoppenheim has brought  his personal support to CINEMANIA. Thanks to his steadfast commitment, he who, in the film industry, is nicknamed “the builder”, has always contributed to and still participates in the development of the festival.

This is why, since 1998, CINEMANIA has awarded its largest purse to the film that garners the most votes from film viewers. Each year, the Mel Hoppenheim Audience Award celebrates the most popular feature film in the CINEMANIA selection. Awarded to such well-established filmmakers as Radu Mihaileanu or François Ozon, this distinction has also allowed new talents such as the director Maïwenn to become much better known in Canada.

In 2012, he received the Grand Prix of America special award at the World Film Festival (WFF) to celebrate his remarkable career. An avowed cinephile, Mel is particularly fascinated by French film icons such as Catherine Deneuve and deeply admires Québécois filmmakers such as Jean-Pierre Lefebvre and Jean-Claude Labrecque.

2019 > SPREAD YOUR WINGS by Nicolas Vanier

2009 > THE CONCERT by Radu Mihaileanu

2007 > THE DIVING BELL AND THE BUTTERFLY by Julian Schnabel

2005 > LIVE AND BECOME by Radu Mihaileanu

1999 > THE GIRL ON THE BRIDGE by Patrice Leconte